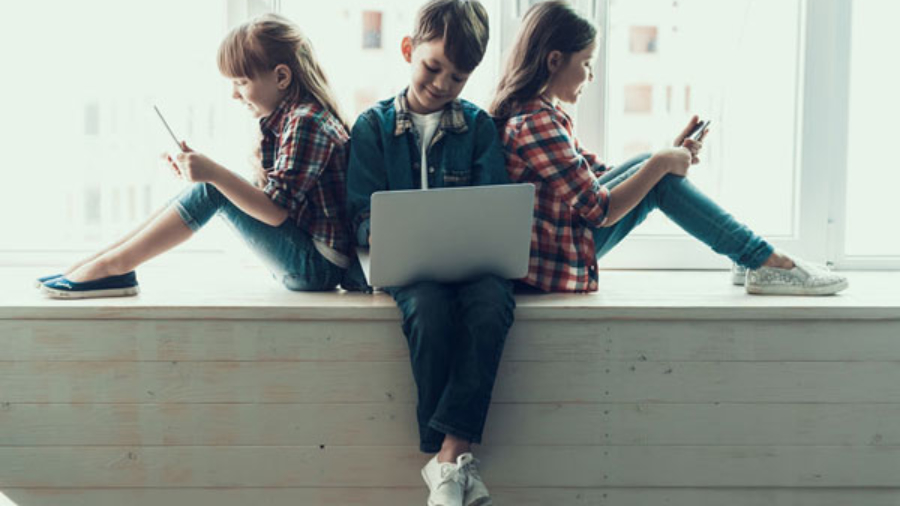 An overabundance of time spent on screen, engaging in fast-paced games, or other quick click-response activities appears to be influencing the growth and development of children’s brains, rewiring physical connections and structures related to cognition and behavior, neuroscientist Mary Helen Immordino-Yang told participants at the EU-funded DIGYMATEX project webinar.

These types of engagement activate the brain’s hedonic reward centers and overactivation can lead to addiction. Of equal concern is how imbalances in brain states might sabotage a child’s happiness as an adult.

Professor Immordino-Yang conducts research at the intersection of education, psychology, and neuroscience at the University of Southern California and is director of the USC Center for Affective Neuroscience, Development, Learning, and Education.

She was one of three scientist guest-speakers at “Growing up on Screens: Rethinking How Children Mature in a Digital Age”, a webinar held on 17 June 2021. The webinar recording is now available for viewing online.

Immordino-Yang stressed the importance of being able to shift between outward task-oriented brain states and more inward, reflective states concerned with deeper meaning-making and broader truths. She uses the analogy of a seesaw, emphasizing the dangers of over-strengthening one side to the detriment of the other.

Immordino-Yang and her team have conducted longitudinal studies suggesting that this meaning-making ability is the mechanism by which adolescents later become happy adults with a healthy sense of purpose and identity.

Technology which demands our constant attention can keep us tilted to the one side – in outward task-oriented modes and prevents us from shifting to inward brain states where our minds can wander, a neurological activity crucial for healthy brain development.

“We’re potentially undermining youths’ opportunities to move themselves into this inner space where they’re building these very important psychological capacities that are potentially pivotal to their wellbeing, emotional stability, and health,” Immordino-Yang said her research group hypothesized.

An individual’s ability to actively regulate their own mental flexibility and to consciously switch between key modes of brain activity as needed is key for healthy cerebral development, she stressed. Children can also have an awareness of this need to bring their mental activity into balance.

“We are potentially shaping youths’ proclivities and the way that they organize and structure their brain development and psychological development,” she said, noting that such impacts are visible in the development of white matter tracks and correlate with the rate of increased thickness of the frontal cortex during adolescence.

Immordino-Yang thinks we need to frame the discussion of adaptive device usage “around people’s own subjective experience but takeaway the hedonic piece of it if we really want to do something useful for children.”

“When you’re developing really strongly on one side, you’re not developing the other side as much, and it’s going to become more and more easy, and in fact attractive and rewarding, to keep falling into that one side, and it becomes really uncomfortable, almost noxious to kids, to be asked to put their devices away or to be asked just to interact with each other. […] What we really need to do is to help kids develop an awareness that this is a really important balance to be able to develop, that it isn’t necessarily pleasant at first if you haven’t been used to it. It’s like using a muscle that isn’t strong yet. But we think you need to do that if you’re going to develop into a whole, healthy person.”

“The ways that kids actively engage in those meaning-making processes are in fact shaping the development of their brains in ways that we can actually see and that statistically mediate — that are the mechanism by which they seem to become happy adults by their own reports,” she said.

Immordino-Yang suggested that insights from neuroscience should inform the future design of device application interfaces and policy interventions to promote healthy cerebral-, psychological-, and social development in children.

“We need to think about how we design and regulate the design of digital technologies so that they potentially honor youths’ need […] to agentically be inclined to develop capacities to move themselves between these psychological and neurological states in ways that facilitate adaptive social functioning, identity development, wellbeing and also deep learning and understanding, and conceptual growth and development over time.”

Immordino-Yang concurred with observations associating excessive digital interaction with diminished attention span and fits of anger, noting that these are “exactly the manifestations that neuroscience would predict. What you’re doing is strengthening the connectivity patterns, and we can see these in the brain, between the physiological signals and reward processing.” She added that “these are the same systems involved in addiction.”

DIGYMATEX project coordinator Marco Hubert of Aarhus University opened the webinar noting how the COVID crisis has increased digital device among children, with usage spilling over from educational applications to increased leisure time spent on screens. He also noted that the concept of digital maturity is borrowed from theories on psychosocial maturity and includes both individual components (such as emotional stability) and social components (such as relationship-building), which interact and influence each other. The project will look into how offline and online patterns differ, interact, or overlap.

Prof. Sonia Livingstone, of the London School of Economics and Political Science (LSE) Department of Media and Communications spoke of the need to recognize a child’s sense of agency and dynamic individual experiences in their use of devices throughout childhood and adolescence. Referring to the UN Convention on the Rights of the Child, she noted that the child has the right to be treated according to his or her “evolving capacities”. Though technology has intensified unprecedented risks and opportunities for children, Livingstone observes that much of the discourse around technology use is actually part of much older questions about the collision between a child’s agency and parental values and concerns. This conversation is simply taking place in a new context, she suggested.

Prof. Halla Holmarsdottir of Oslo Metropolitan University’s Department of Primary and Secondary Teacher Education and Faculty of Education and International Studies, spoke of the importance of parents and educators working together to integrate cross-curricular approaches to help children develop balanced lifestyles and the skills needed to navigate the digital aspects of their lives.

“Kids are also feeling more competent and knowledgeable about devices. Appreciating and understanding that can be an important thing,” Holmarsdottir said.

She questioned whether the amount of time kids spend on screens is a clear indicator of device overuse and proposes a need to look more closely at the context and nature of the child’s digital behavior, pointing to the use of devices for education and healthy social interaction during the COVID crisis. “Without screen time, people would have been much more socially isolated in the past year.”